Black Devil Granny and the Ashtrays of Treason

As a child I heard colourful, sometimes horrifying stories about my grandmother; take the story that granddad was arrested for shooting his best friend(found in in bed with Gran in ),or the story that on her return to , her new boyfriend, a glass blower, when commissioned to produce a unique set of glassware for Princess Marina’s marriage in 1934, produced a second set for Gran. Mostly destroyed in the bombing of in the Blitz, a couple of alleged royal glass ashtrays survive, my daughter calls them The Ashtrays of Treason.

The banknote is a souvenir of Gran's , Grandad's and Mum's walk from Calais to Germany 198/1919. I like the inscription. Counterfeiters will be sentneced to Hard labour

So it did not seem strange to hear that my 8 year old grandmother had had a police escort to and from School in 1902 and for some years after. I could see the need for that policeman.

This school run was no cushy number for him .Gran told me that she would get out of the school punch’ her’ policeman in the stomach, steal his helmet whilst he was doubled over , run home, climb on the roof , because sometimes he went home before she climbed down , so she escaped a thrashing. Years later when Mum and Gran returned from in the 1920s, (Gran, of course, married a German waiter in 1914) Gran ran across the road, threw her arms around an elderly plump policeman and cried ‘Do you remember me?’

“Remember you! How could I forget you, you Bloody Black Devil?” He replied.

I like to think this exchange was affectionate, but my mum said she silently prayed for the earth to swallow her.

Granny wasn’t embarrassed, laughing she told him how her Mother in law would scold my grandfather: ‘You couldn’t find a devil black enough for you in all of ? You had to go to to find a blacker one?’ 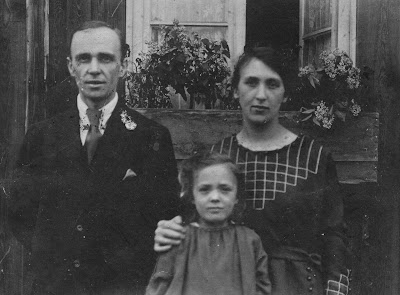 Grandad, Mum and the Black Devil. Germany about 1920. they look rough in this picture because they've all just had typhoid.

Dr Still? the plump policeman and a humane Victorian ASBO

In the late seventies, the British press ran stories on troublesome girls locked in mental hospitals for the best part of the century, and I began to question the special treatment Gran received. Gran ,by then, had dementia an wasnt answering, so I worried my reluctant Mum who eventually conceded it was’ that Bloody Doctors doing’- It made no sense and I can’t now be sure that hindsight is colouring my recollection. Because now as two of my three children, all my grandchildren and I are diagnosed with ADHD, Gran’s police escort comes to mind again.

My Gran had a wonderful mother, Laura, a widowed washerwoman who would’ help anybody in trouble’, a photo shows Laura’s plywood coffin on a scrub of grass, piled with posies from her neighbours. *It was in 1902 that the first and greatest British pediatrician Dr Still described a group of children with a ’ defect in moral control’,- aggressive, passionate, lawless, inattentive and impulsive despite ‘good enough parenting’, and urged support for these children. The first clinical description of ADHD, and he has 8 year old Gran in a nutshell.

When I was asked to write this article for Zit Stil magazine, I asked the archivist at Great Ormond Street Children’s hospital if it was possible to confirm that Gran had been diagnosed by Dr Still. He couldn’t, he said that unless she was an In- patient Gran’s records would have been in Dr Still’s personal records before 1913 but added:

‘He was more sensitive to the needs of children than most of his contemporaries, so may well have recommended the 'police escort' rather than some more
restrictive treatment.’

The ‘police escort’ was a very practical solution to my gran’s mischievous truancy .No threats, fines or Asbos for a working single mother just support .The Victorians got something right. And thru the relationship between Gran and her policeman seems rough, it was affectionate, on Gran’s side, I think it was on his too.

Certainly, Gran was more confident in herself than many adults I see , especially those who have been singled out for moral condemnation as children (such as expulsions ,character denunciations from carers and professionals etc) in my heart I think her confidence was the legacy of the sensitivity of whoever recommended a police escort to curb truancy and misbehaviour. She had for whatever reason fond memories of where she had certainly been treated there for something as a free patient. She brought me Peter Pan because the royalties were bequeathed to the hospital, through we never read children’s books.

*Its noticeable how often philanthropists occur in ADHD families, generosity and heroism are the less publicized sides of impulsivity, of not calculating the cost of every move 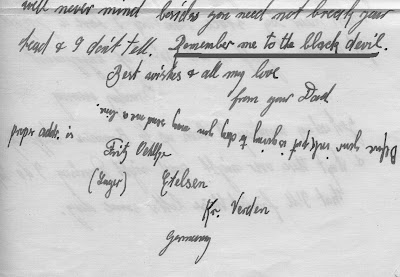 Remember me to the black devil. Fragment of a letter- grandad to Mum . 1937?

She was a difficult parent for my mum ,and my brothers were wary of her; but she was the light of my childhood.

We walked over the downs, Gran talking, constantly talking; nature lore, tall stories, supported by a walking stick carved with a gruesome intricate design of snakes, asked about it she would tease and darkly hint at occult knowledge.

She told me tales of Victorian London, interwar Berlin, and her wanderings thru France and Belgium, and back to Britain, working variously as a waitress or cook, all her work stories ending with the phrase "so I asked for my cards" (by which she meant resigned on the spot)

She interwove these tales with historical events - she did the 1905 Russian Revolution - aristocrat’s carriages riding down peasants- but retold with such colour and verve that for a long time I thought she was there. Unsuitable tales of serial killers and concentration camps (My grandfather was last heard of in one, we don’t know why he was there- having previously been interned in a British camp in the first war).She worried that the world was irrevocably pushed of its axis by American moon rockets. A humanist, she would lecture me on ‘colour prejudice’ (the pc term then) and other evils.

Later , in the hellish light (her walls and always-closed -curtains were deepest red) of her living room, at risk from occasional slides of rubbish and curios from the table (‘I’m just having a tidy up’ she would say, the truth was she had nowhere to put anything because every cubic inch of storage space was for tea, dried milk and sugar so as not to face a third world war with out a good cuppa) - She would read to me, the Rubaiyat of Omar Khaiyyam , Longfellow’s Hiawatha, Dickens and bits of Byron .Like many working class people of her generation she was passionate about self education

We rarely finished a book; we would be fine until ‘Old Marley was as dead as a door-nail.’ then digress, on door nails, entomology, dead people she had known, spiritualism-. We played draughts, went to the cinema, counted her cooking scars. She was a wonderful cook, even without allowing for her generation, class and nationality. But she must wrestle with dinner - lobsters especially had marked her lower arms, and a terrifying eel incident seeded my vegetarianism.

She tried to teach me German. A hopeless task I struggled with English, having (I know now) poor sound discrimination and abysmal acoustic memory. I’d approximate to the nearest English words. She would finish my German lessons by shouting: “Captain Hook’s Coming.” quite baffling me.

Gran made life difficult for people, including her, but she had magic. I wouldn’t have wanted her different.