ADHD, and PSYCHOSTIMULANTS and ADDICTION

A major reason why many people, including some scientists, hesitate to prescribe psycho-stimulants is the fear of possible addiction, especially following prolonged use. On the other hand, quite a few doctors often prescribe these medications but with inadequate up to date knowledge of new research, so that they cannot make the best possible defence against there critics. This article reviews some surprising and counterintuitive research, and is intended not just for lay people but also many professionals.

Addictions to alcohol, nicotine, amphetamines (speed) and cocaine occur in people with ADHD twice as often in the general population. This may be partly genetically explained. A gene produces the protein that forms the dopamine-2 receptor on the "postsynaptic" neuron in the striatum of the midbrain (postsynaptic refers to the neuron terminal after the synaptic cleft or gap between the two neurons). This receptor receives dopamine from the presynaptic neuron. The gene exists in two forms: A1 and an A2 type. The A1 type occurs in 20% of the general population, but in 50% of people with ADHD and in 87% of cocaine addicts. It is known that not everyone who smokes cigarettes or drinks alcohol becomes addicted; moreover that only 25% of cocaine users become addicted. Genetic factors could therefore play a role. Moreover, the impulsiveness of young people with ADHD and their feelings of awkwardness about themselves often lead to experimentation with drugs, which they experience as a form of self medication. People with ADHD often think more clearly and become calmer after taking amphetamines rather then feeling the’ high’ experienced by people without ADHD.

It is a paradox that ADHD is often treated successfully with Ritalin or amphetamine, without addiction developing, despite people with ADHD being at a greater general risk of addiction. There are even studies that demonstrate that children with ADHD who have been treated for some years with Ritalin have a lower risk of ever developing any addiction then children with ADHD who were not treated with Ritalin. The information flow in neuronal circuits is achieved by electrical potentials that spread along the axons to the presynapse at the terminal where it is carried by neurotransmitters such as dopamine.
Dopamine then binds to a receptor on the postsynaptic terminal of the next neuron in the circuit .This triggers the ‘ion channels ‘in the post synaptic membrane to open, temporarily allowing electrically positively charged calcium ions to flow within the neuron. The change in charge leads to the generation of a new electrical action potential responsible for further postsynaptic information flow.

Ritalin normalizes this so that the ADHD symptoms diminish. Not only improving focus, but boring tasks are better prioritized (e.g. revision) and impulsiveness is reduced.

Why is it that someone with ADHD, who normally runs an elevated risk
of addiction, is helped by Ritalin or amphetamine without becoming addicted to the medication? And why, then, are there problems with cocaine addiction? The answers are many:

1) In ADHD the amount of dopamine available in the synaptic cleft is
NORMALIZED (whereas as in people without ADHD Ritalin increases dopamine abnormally).
2) Cocaine is usually inhaled or injected giving a very quick dopamine increase (peak effect after 5 minutes) and a "high" feeling. If Ritalin is inhaled or injected the same "high" feeling is obtained .In both, the "high" feeling lasts about 20 minutes. If
Ritalin is taken by mouth the peak concentration in the brain lasts about 60
minutes, without any "high”.
3) The peak concentration of dopamine after taking a Ritalin pill occurs after15-20 minutes, whereas for cocaine it is 2-4 minutes. With Ritalin the increased amount of available dopamine in the brains falls to half after 90 minutes, with cocaine it takes just 20 minutes. The rapid reduction after cocaine ingestion motivates the user to take another dose, this is not the case with Ritalin the amount of dopamine remains optimal for a long time. Moreover Ritalin releases the dopamine in a "tonic" way, that is, evenly over time, place, simulating the natural release of dopamine , leading to normalisation If an artificially regulated dosage of cocaine is given so that the dopamine stays saturated then there is no is no new "high".

4) In a therapeutic context, Ritalin is administered using a strict schedule, and is not tied to pleasure seeking. Rather, it is mainly used for boring tasks, allowing a more meaningful experience, closer to that of people without ADHD. Cocaine is used in circumstances of pleasure which in itself is more naturally associated with dopamine release.
5) Cocaine also acts on the serotonin system, which is not the case with Ritalin or amphetamine.
6) "Speed" in illicit use is taken in unmeasured dose but the estimated dose is 10 times higher than for therapeutic use in ADHD. Moreover, the drug user often injects speed rather then administers by mouth.
7) There are indications that Ritalin maybe neuroprotective (at the postsynaptic neuron) against excitoneurotoxicity a. Also, there are indications that it will protect against deterioration of dopaminergic neurons in Parkinson’s disease. Nicotine is also neuroprotective against Parkinson’s disease and Alzheimer's disease, but, of course the disadvantages of chronic nicotine use outweigh these potential benefits.

Furthermore, there remains the delicate problem of how someone with ADHD who is addicted to cocaine can best be treated. In this area there is still much research to be done, but there are already some publications showing that in some cases it may be possible to replace cocaine with Ritalin.

LONG-TERM EFFECTS OF RILATINE AND AMPHETAMINES

It is often rightly pointed out that there are no scientific studies on the long-term effects of the therapeutic use of these medications to treat ADHD. Yet we know that almost half of children with ADHD outgrow ADHD and the need for medication.

Traditionally, there was a presumption that the lessening of ADHD symptoms was due to natural maturation so that there was no further need for amphetamine or Ritalin. But recently scientists have begun to entertain the possibility that these drugs produce long-term positive permanent change in the brain, brought about by neuroplasticity, which in recent years has become a hot topic in neuroscience.

1) NEUROPLASTICITY THAT LEADS TO NORMALISATION
continuing use of medication will not only provide better signal transfer in neuronal circuits, but also activate genes in postsynaptic neurons, stimulating the creation of proteins that are the building blocks of new postsynaptic dopamine receptors. Possibly, these proteins also create a decrease in presynaptic dopamine receptors. This would effectively mean NORMALISATION; we could even speak of HEALING. Therefore, it is now recommended to cease medication every 2-3 years temporarily to see if further treatment is needed. LONG-TERM EFFECTS OF RILATINE and amphetamines

2) NEURO plasticity THAT LEADS TO DEPRESSION
Researchers using young rats treated with intravenous Ritalin found that as adults the rats exhibited symptoms of depression, ambient incentives usually experienced as pleasant (such as sugar water) seemed to give them no satisfaction and stressful or conflicted situations produced despairing behaviour. This has led to the view that the neuronal plasticity exhibited here can lead to unfavourable outcomes such as DEPRESSION. If this is extrapolated to humans, it means that after years of

Ritalin use depression could develop. This has not yet been demonstrated by researchers Moreover, there are two important points to make. First, the rats were administered with Ritalin intravenously which is quite different to oral ingestion. Secondly, the researchers used healthy rats. In theory, one can imagine that for people without ADHD this hypothesis of resulting long term depression may have some validity., but that in ADHD a normalization through neuronal plasticity occurs:. Conceivably by this hypothesis in healthy people long term use of Ritalin may lead to the occurrence of a neuroplasticity though over shooting. If that is true great importance must be attached to correct diagnosis of ADHD prior to beginning a long-term treatment with Ritalin or amphetamine.

.
It is inadmissible to let the decision to begin long term medication depend on the symptomatic effects of trial doses. Medication will, in the short term have positive effects in people without ADHD. It must be emphasized that an ADHD diagnosis cannot be concluded from a positive reaction to a few administrations of Ritalin.

3) NEUROPLASTICITY THAT LEADS TO ADDICTION

Only with non-therapeutic use of these medications, where high doses are taken, often intravenously, and in the context of pleasure seeking does addiction arise. Often only when a genetic disposition also contributes to the addiction. In the latter case, the chronic overabundance of dopamine would trigger even more postsynaptic protein synthesis and the production of more postsynaptic receptors. Research shows that this occurs not only in the striatum (nucleus accumbens among others) but also occurs in the prefrontal cerebral cortex (orbito frontal cerebral cortex, located above the orbital, i.e. the eye socket) to which it is connected. It has demonstrated that the cocaine addict shows over activity in this area during cocaine intake or during acute rehabilitation. 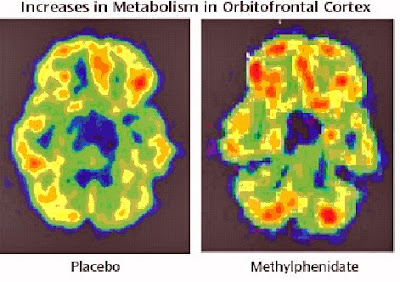 4) Rare problem of HABITUATION to long term therapeutic use of Ritalin or amphetamine in cases of ADHD
About 2-5% of patients report that after a few months (or sometimes more than one year) Ritalin no longer has a positive effect. This can probably also be explained by a form of neuronal plasticity achieving a different balance than the ones described previously. In these cases it is recommended to switch to another medication e.g. amphetamine or a noradrenergic antidepressant (desipramine, imipramine), Efexor or Strattera (also has a noradrenergic effect). It may also be necessary to switch medication a few times a year employing a rotation scheme.

translated from the Flemish by Stephanie Clark